My father-in-law Tony died on 25t March 2007.  Even though he had been unwell for eight months before he died, it was still such an awful shock to the family, with a rapid decline in his health that felt like it happened overnight.

Tony was a special man, a true gentleman in every sense of the word, a kind heart, who had a warmth that emanated from him, he also gave the best hugs!  I only had seven years with him, in fact, he has been gone longer than I knew him for, I really do miss him.

So much has taken place since he passed.  Craig and I got married, we moved house, we had a little girl. Sometimes, my husband is so sad about the fact that Tony has missed so much, especially seeing Ariane grow into the wonderful little girl she is now at six years old.  This he feels is a fact, Tony has missed it all.  I disagree.

I feel like Tony is always watching Ariane, is around us more than we actually appreciate.  Although in the twelve years since he died, I’ve seen many mediums and also had my own spiritual experiences which I have written about in these blog posts, I would receive messages from all my different loved ones who have passed and also have visitation dreams of grandparents but never in all those years would I hear a thing from Tony.

I would wonder about this, he just felt so “distant”.  Like the others find it easy to penetrate our energy field however Tony finds it more of a challenge for some reason I can’t explain. Once, during a disagreement with Craig about his views on the afterlife (i.e. there is no afterlife) he snapped that it was very convenient that the one person he was closest too that has died is the one person I can’t appear to connect too……….he had a point.

I did have a friend, who is also a medium pick up on him one time after I told her that Tony never comes through.  She got some great evidence when she connected to his spirit and asked me about the French Fancy cakes that he would offer me when I went to his house which was accurate.

A few years after that and still no contact from Tony, we were practising mediumship platform work during our Monday night Circle Class.  One of the fledgeling mediums who was due to do her first platform work that following week, took to the floor for some practice. This is what happened as she started to link in with spirit:

“I have a dog here, a bulldog type, like Staffy, Brindle and he is with a gentleman, can anyone take it?”.

I felt the hairs on the back of my neck stand up.  Tony had a Staffordshire Bull Terrier called Cooper, brindle in colour, that was the family pet but was actually my husband’s dog who passed away three years after Tony did.  I was particularly close to Cooper and as soon as the medium (who was relatively new to the class and knew nothing about Tony or Cooper) mentioned these two together, I realised with excitement that this could be Tony.  No one else in the room could take the pairing so I raised my hand.

“He is so emotional to be here Tanya, he is saying to me that he has always found this hard, that it doesn’t come easily to him to reach out to you, hence why he brought the dog, for some reason that makes it easier for him.  He is really quite emotional at the moment, he must have been an emotional man (this is correct).  He is saying that he has two sons (correct) but never had a daughter, however, he now has a little granddaughter (correct).  He wants to thank you, in particular, Tanya for always talking about him with her and keeping his memory alive (I often talk about Tony to Ariane as if he is still alive, I include him in everything, like when she is drawing pictures of her family to ensure he is not forgotten).  He is telling me about his granddaughter and saying how well she is going to do especially this year at school, you are worried about her at the moment with school but he is saying there is no need to at all, she will excel this year (all true).  He doesn’t want to scare her but he does watch her whilst she plays with her toys.  He says “She is a little Star, quite literally a Star, the word Star has so much meaning here” does that make sense Tanya?” said the medium.

I smiled through my tears (I had never sobbed so much at class before!). I explained to the medium that there is a portrait photo of Ariane on my wall at home with a star shape and the word STAR above her head.  The name Ariane also translates into: little star.

Some weeks later, I woke up in the early hours on a Saturday morning. It was around 5am and I struggled to get back to sleep.  I decided that may be a good time to practice trying to go out of the body (completely normal behaviour I know!).  This happened almost instantly, so much more easily than normal, within seconds I felt myself leave my body, spin around and look at myself and my husband asleep in the bed as I hovered above.  I flew through the wall but I didn’t get very far and zoomed back to my bed and realised I was no longer lying there, I had disappeared.  “Damn I’m dreaming!” I said and realised I was in a lucid dream and it was pitch black in the bedroom.

“Please give me colour!” I shouted out in the “dream”.  Unexpectedly, daylight was switched on into my bedroom, the colours so intense and strong that I had to shield my eyes.  Wow!!  I thought as I noticed that Craig was now sitting up in bed and Ariane was running around the bedroom.  Outside the bedroom window, day time was in full swing and I saw people milling about and some looking in my room, some that are alive and some that I knew were dead but they didn’t actually realise it.  I then saw an old work colleague (alive) who was walking Cooper the dog, the excitement built up in me when I saw him.

I looked down at the palm of my hands and saw all the lines and intricate details of my skin.  “I’m awake in my dream!” I shouted with startling clarity.  It was another lucid dream, the type that gives me one foot in this consciousness and the other in the consciousness that is home to all those that have died.

Craig was still sitting up in bed and I understood that he was dreaming, as was I and I would remember every single detail of this but his chance of recollection was slim.  All the same, I knew exactly what I had to do.  In the past when I had dreams like this I had called in my dead relatives to take a rare opportunity to speak to them, this was my chance to finally connect to Tony in a visitation dream.

I shouted out “Tony, come and see us!!”.  I waited and nothing happened.  I shouted it again and again and still nothing.  I felt so frustrated.  I was awake in this dream and it was my one chance to do this!  How could I get him to come?  Then it dawned on me.  I needed God power.  God power is when we ask the highest being, the angels, the source, the light that is all of love to help us.

“God, please can you bring Tony in to see us?” I asked calmly.

In a heartbeat, my bedroom door swung open and in breezed Tony.  I gasped.  It was him in glorious reality, not a dream, it was him.  He was as real to me in that dream as my husband is now to me in waking.  He looked around 45 years old, hair lightly greying, stone wash blue jeans and a white Aaron jumper with a red pattern on.  We looked at each other and both couldn’t speak as the emotions were just too strong.  He tried to get words out and he couldn’t, the same for me.  Then he looked up and saw Craig, he walked towards me and brushed past me but not in a rude way, in a polite manner that tapped my arm lightly as his face filled with the deepest tears of joy and love for his son.  This was all too much for me, I couldn’t hold my energy there any longer, the pure emotion of it all pulled me straight back to my bed, to my waking life.  I was sobbing.

As I sat up and wiped my cheeks, I felt like I had been hit over the head with a brick.  The experience was so intense and real that I must have been in such a deep state of the subconscious to maintain it.  My forehead ached and it took me a good ten minutes to settle my energies and feel like I was part of “here” again.

On his waking, I asked my husband if he dreamt of his dad.  He said he didn’t, and if he did, he couldn’t remember. I won’t lie to say that I was disappointed to hear this.  But that disappointment didn’t last long because my faith in that Tony had visited me (us!) that morning was so strong that it reassured me that all is well, Tony is well, peaceful and happy.

It also taught me that whenever you need help or if you want something so desperately, just use a little God power, it will never ever let you down. 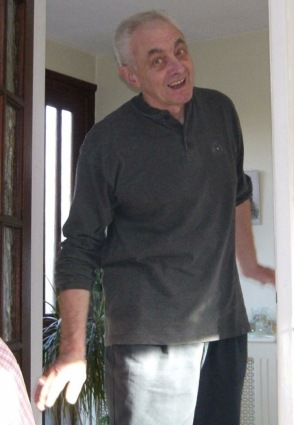